I am so pleased to introduce you all to Zanna. Without any further ado I'll let her take over from here-

What Makes A Hero?

When asked what makes a book they have read linger in the memory, many people will say the characters.
Creating characters that we can all identify with and care about is a fun and challenging part of writing a book. When it comes to writing the ‘hero’ or the lead male character in a novel it’s essential to conjure up a guy we will like, be rooting for, care about and, ok, quite probably fancy a bit as well!

So, what makes the ideal hero in a novel? Opinions, quite naturally, vary depending on who you ask. Some readers might opt for alpha males – strong, determined, driven, hugely successful, maybe a little arrogant, macho, a leader, brave, powerful, too handsome for his own good.

Others –myself included – prefer the beta male. He’s the charming, handsome boy-next-door, more considerate than the alpha of the species, he’s also playful, fun, good company, in some ways more ‘real’ than the alpha.

Does he need to have pots of money? Where does your hero have to come on the financial meter? Doing ok for himself, wealthy, pots of money, millionaire, billionaire?

Do you opt for him to be a sharp dresser, needing him to be suave and sophisticated, clothed in designer suits and dinner jackets? Do you prefer him to be a bit more rough-around-the-edges, sporting the timeless classic of jeans and white shirt combo?

Tanned and blonde could be the right substitute for tall, dark and handsome for many females. Does he need to be tall though? Can he wear glasses? Does he have to be perfectly toned with six-pack stomach or bulging biceps?

When it comes to profession does it matter what the hero does? Over the years I have read books where the hero has been everything from an ex con artist to a prince, from a struggling painter to policeman, pilot, race car driver, actor, musician, builder, architect, landscape gardener, writer, hotelier, dog trainer, store manager, worked in an office.

In my recently released novel How Do You Spell Love? Kat is focussed on trying to get over the end of her relationship with Nathan when she meets Alex who is an architect and building site project manager (tall, closely cropped light brown hair, stubble – think of the actor Paul Walker!) and Summer is trying to get her relationship with Rob back on track when she meets Tom  who is a planning officer for the local council (sorry but I’m going to use the tall, dark and handsome cliché here! Think of the actor James Lafferty). For several reasons Kat shouldn’t be with Alex, and Summer shouldn’t be with Tom – but they are drawn to each other and start to wonder if maybe life is about to get even more complicated.

So, now, it’s over to you - what would you look for from a hero in a book you were reading? What are your requirements re looks, job and personality? Do you prefer the alpha or beta male?

Zanna Mackenzie is the author of How Do You Spell Love, 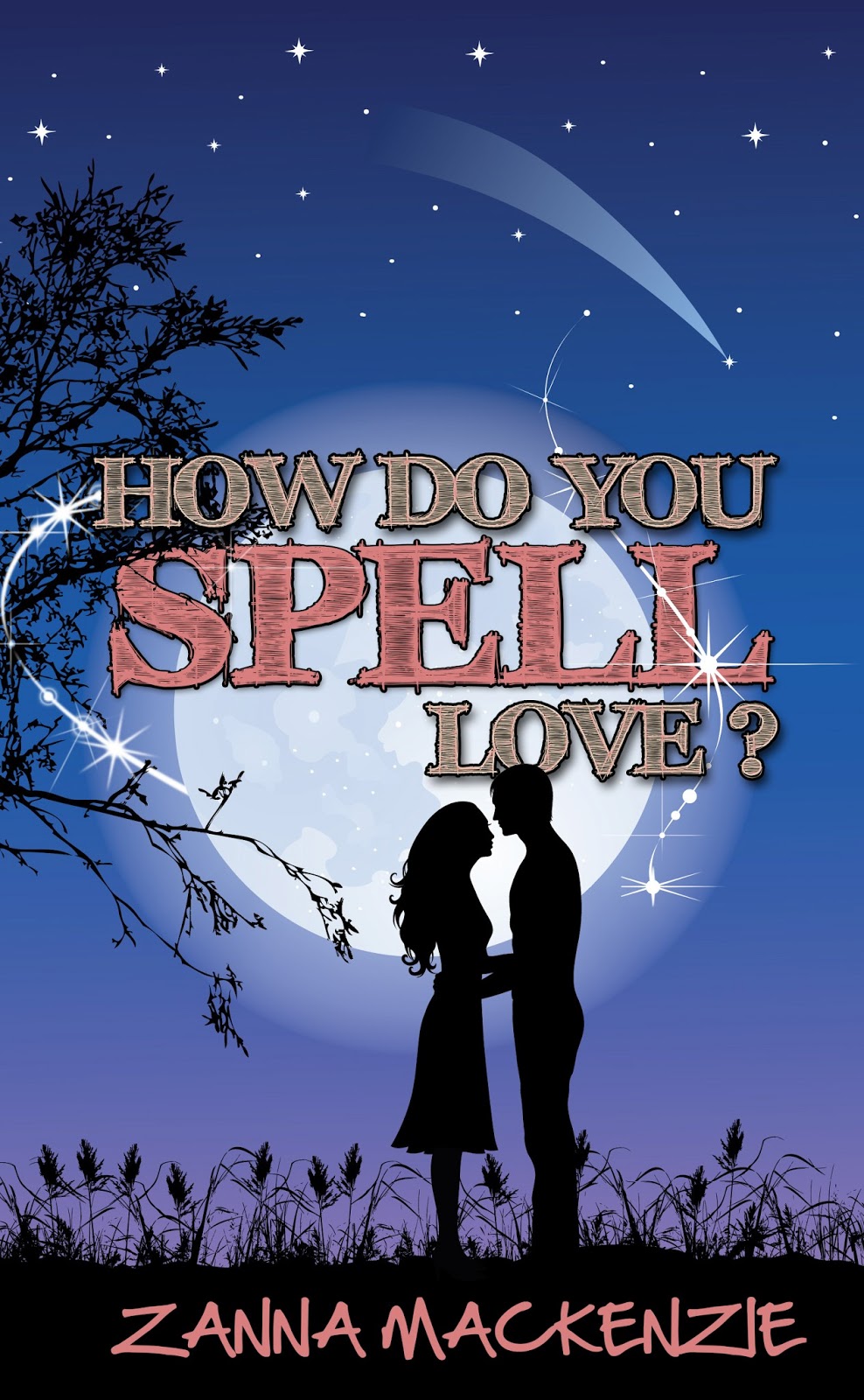 Book blurb:
Make A Wish…
Kat can’t help wishing there was more to life than this. What happened to her dream job? What happened with Nathan?
Summer is wondering where her life is going too… battling the developers of a controversial housing estate and working out why boyfriend Rob is increasingly distant.
When the developers win the battle and move into town everyone’s life is turned upside down.
Kat meets building site project manager Alex. She enjoys his company far too much, even though he’s on the town’s most hated list.
Summer meets Tom who has plenty of relationship troubles of his own, so things could get really complicated.
Soon everyone is keeping secrets, lives change and hearts are broken. Is everything falling apart, or does life just work in mysterious ways…

Book extract:
How Do You Spell Love?
Kat pushed the last of the cottage cheese and shrimp sandwiches into the cool box and slammed the van door shut. As if her life wasn’t enough of a disaster zone as it was – no money, lousy job, losing Nathan, having to move back home to live with her parents – now this had to go and happen. Plus, of course, it didn’t help that today she was feeling shattered after spending half the night chanting some ridiculous protection spell in the middle of the allotments with Summer.
Cringing as a van full of builders stopped at the nearby traffic lights, Kat braced herself for the inevitable. After the standard-issue wolf whistles had drifted across from their van, next came the leered, “Wouldn’t argue with that, love!” as one of them nodded towards her sparkling clean van, parked neatly at the curb. The words “A Bit of Crumpet on the Road” emblazoned down the side in deep purple, glittery lettering. Not for the first time Kat cursed her boss Janice for calling her bakery-cum-deli that name.
Kat sighed, well it certainly drew comments from the public and from their customers, not always welcome ones, but as Janice was always keen to point out, any kind of publicity and attention was, in her eyes, good publicity and attention.
Pulling her navy and white striped apron more tightly around her T-shirt and shorts, Kat ignored the builders and climbed into her van to begin that morning’s deliveries. As she indicated to pull out into the busy street in Luisborough, she mulled over the bad news – that she was to add the controversial Netherton Meadows housing development to her daily sandwich round.
Netherton Meadows. Yippee. If Summer found out, she’d surely be ostracised for fraternising with the environmental enemy. This was a development that pretty much everyone in Luisborough had fought against for getting on towards a year. It had been the focus of STW campaigns. It went against everything that Kat believed in environmental-wise. Everyone hated the Netherton Meadows developers. Except, it seemed, Janice, who was perfectly happy to, in her words, ‘supply yummy builders with yummy sandwiches.’
Lost in thought, Kat just managed to spot the approaching traffic lights had turned to red and hastily slammed a foot on the brake. The van lurched to a halt and several boxes of crisps and one of the cool boxes in the back tipped over. Damn. It was shaping up to be one of those days.
Two hours later Kat had visited all her usual drops, was extremely hot and bothered, and could put off going to Netherton Meadows no longer.
Driving through the assorted vans, machinery and portacabins Kat parked next to a building marked as being the Site Office and hit the button on the dashboard. Tinkling chimes filled the air as Kat climbed from the driver’s seat and made to open the back doors of the vehicle. It was embarrassing enough that the van had the company name in large lettering along its side but, just to make sure that it received maximum exposure – and achieved maximum embarrassment – Janice had had some irritating chimes fitted to the vehicle too. Kat was under strict instructions to sound the chimes when she called at all of the sites where people came out to the van; such as they were about to at Netherton Meadows.
A man came down the steps of the office with a grin on his face and walked towards her. “Hi, you must be Kat.” He wedged a clipboard under his left arm and offered a hand to shake. “I’m Alex. Project manager for the site.”
“Hi,” mumbled Kat, spotting a group of hard-hat-clad builders advancing towards her with hungry expressions on their faces.
“Right, lads,” Alex turned towards the men. “This is Kat and she’s very kindly agreed to venture onto this site to bring you all your lunch. Don’t give her any hassle, OK?”
The men laughed and then nodded. “Sure, Alex. You’re the boss.”
Fifteen minutes later it seemed that all of the team at the development had made their sandwich, crisp and drink selections and sloped off to devour them in the sunshine. Only one of the builders, a portly man who must have been twenty years Kat’s senior, had pushed the boundaries a little, despite Alex’s earlier warning. As he’d selected a smoked salmon and cream cheese roll – a choice that had surprised Kat somewhat, having pegged him as a ham and cheese kind of guy – he’d asked Kat if she’d fancy joining him for a drink sometime. She’d politely declined his offer, saying that she had a boyfriend. No need to tell him that, technically, she and Nathan were no longer an item. No need to tell him why either.

------------------
Author bio:
Zanna Mackenzie lives in the UK with her husband, 4 dogs, a vegetable patch that’s home to far too many weeds and an ever expanding library of books waiting to be read.
Being a freelance writer and editor of business publications is her ‘day job’ but, at every opportunity, she can be found scribbling down notes on scenes for whatever novel she’s working on. She loves it when the characters in her novels take on minds of their own and start deviating from the original plot!
Formerly a travel agent and therapist (she has qualifications in clinical aromatherapy, crystal healing, naturopathic nutrition and herbalism) she loves walking the dogs and gardening – that’s when she’s not writing or reading!
Zanna has written two novels, The Love Programme (Astraea Press) and How Do You Spell Love? (Crooked Cat Publishing) and both were published in early 2013.
Follow Links:
Find out more about Zanna at:
www.zannamackenzie.blogspot.co.uk
www.zannamackenzie.co.uk
Twitter: @ZannaMacKenzie
Facebook: www.facebook.com/zanna. mackenzie